Our Lottery System Reviews are all based on real users reviews and reports. No lottery system is worth using if it does not work to win the lottery, see which lottery systems truly work and which ones do not work to win the lottery! Legitimate Lottery Systems Reviews Are Necessary To Weed Out The False Or Non-Winning Systems, This Saves You! Time And Wasted Money. We have real lottery winning dreams just like you and frankly we are sick and tired of the amount of useless lottery systems making ridiculous claims about how great they are, and even more sickening, is the growing number of misleading lottery system reviews and lottery system review sites giving fake reviews, well that Stops Here And Now!!!

We have investigated researched and tested many lottery systems to see if they would work as advertised. We have gathered numerous reports from many sources on these lottery systems by real users, informing us if the system worked or did not work for them. We rate each lottery system out of a possible 10 $ Dollar Signs – Bang For Your Buck System Rating, the more Dollar Signs the better the system is at winning lottery games. You can then choose the system you feel is best for YOU!

Never trust a lottery system review site that gives you or pushes you towards a link to a system that is an affiliate sellers link. If the link/url has (hop) or (aff) in it, means it’s an affiliate and the same applies if the system is sold through a ClickBank or JVZoo sales page or similar selling sites, so do not be fooled. If we supply any links it will be to the main lottery system website as we are NOT affiliate sellers.

Lottery Systems Caught As Fake Systems And Or Now Vanished Along with All Money No Refunds ( We warned you!)

See proof of real lottery winning systems, real lottery winners voted on. See which system or systems won lottery games for them! Take a look at the latest official poll results below:(Click on poll to open larger in new window) You cannot get better solid proof of which lottery systems are working or not working! (click poll chart to open larger) 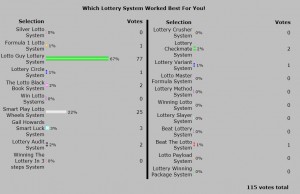 When looking at any lottery system to use, first look at the signs that may indicate if it is a false or misleading lottery system:

Here are a few articles out of many that will inform you more about a few systems.

We want your report on the lottery system or lottery systems you have tried. Did the system help you win money? Did the system work as advertised? Does the system have an affiliate program which shows is mlm type system not real winning system? What problems did you have? If system has a guaranteed refund and you requested it, did you receive it?  We do not answer questions, we just gather lottery system reviews to inform others. Your review is very important!